Book Launch: The Egyptian Army and the Muslim Brotherhood, by Sara Tonsy
19 Jan 2022

Photo by the author
Sara Tonsy

My book, The Egyptian Army and the Muslim Brotherhood, examines power relations between the Egyptian Armed Forces (EAF) and the Muslim Brotherhood (MB) during various periods of time, and the rejuvenation of their rivalry since the 2011 uprising. It raises questions, such as, why did they become rivals? How did their rivalry affect the Egyptian political field? What were the consequences of this rivalry? I argue that the similarities between both political actors, the MB and EAF, brought them together as political contenders, resulting in different episodes of collective violence and a monopoly by “non-civilian” political forces over the political field. By shedding light on one of the power dynamics that unraveled and led to extensive repercussions on individual, national, and regional levels, my book represents a journey in reading the region – or more specifically Egypt – differently and critically. 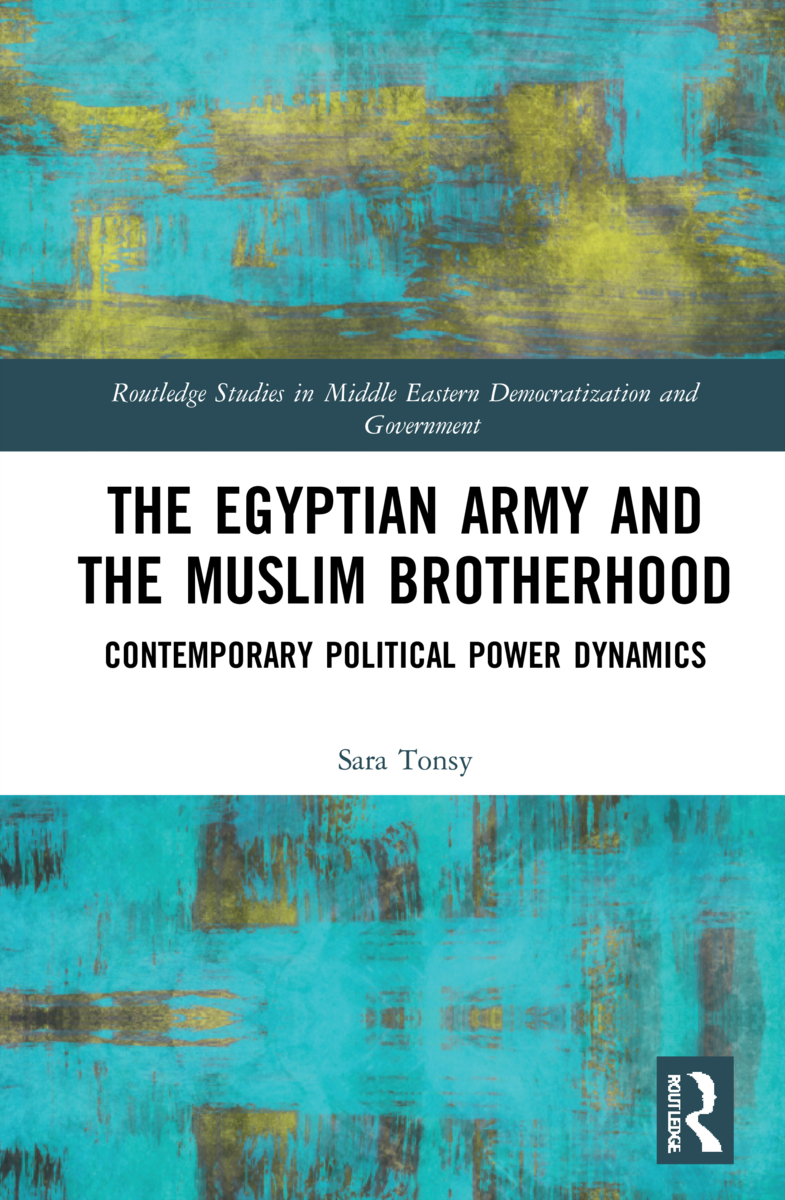 The repercussions of the Arab uprisings varied across the region and continue in waves in some countries. In Egypt, the 2013 coup d’état removed president Mohamed Morsi of the MB from office. In doing so, the EAF ended a power struggle that had unfolded between them and the MB since the 2011 uprising, neutralizing potential rivals and putting an end to participatory politics by civilians in general.

Despite this outcome, their similarities - rather than their differences - have made rivals of the MB and EAF, whether historically or recently. The differences are obvious between the MB on the one hand as a self-styled “social movement” and, after 2011, a legal parliamentary party, and the EAF on the other hand, as a leading state apparatus. Nonetheless, both are, and see themselves, as political actors that share six main similarities: hierarchy, obedience, absolutism, secrecy, order and otherness. These similarities explain the periodic and violent confrontations between the MB and the EAF.

Analysis of the discourse produced by the EAF and the works of Robert Springborg, Yezid Sayigh, Zeinab Abul-Magd, among others, demonstrate the social and political embeddedness of that discourse. On the other hand, research on the MB, like Richard Mitchell’s book on the early years of the organization, or more recent ethnographic studies by Marie Vannetzel, validate the significance of the MB’s internal discourse in outlining the similarities between both political actors.

The jundiyya (soldier’s life) that both political actors instill in their members and followers represents only the shell of the similarities between them. For the EAF, the soldier's life is dictated by the nature of the military as an institution but for the MB, it is instilled through discourse and common internal practice.

Using these six similarities, and by analyzing the internal and external political discourse of both political actors, I outline how they address one another through public discourse and how they build up their rivalry through their respective internal discourse, maintained by their similarities.

This rejuvenated the battle between the MB and the EAF, and the mobilization of the six elements that helped construct and maintain both political actors’ identities and presence but at the same time, left little room for “civilians.”

No Place for Civilians

Throughout the analysis, the limits of the political, social and arguably geographical space reserved for “civilians,” i.e. the citizens of the country as political actors and members of society, becomes evident. While the Muslim Brothers are “civilians,” the interviews I carried out and the analysis of narratives written by the Brothers reveal that the MB is not considered a civilian political actor or organization. They were given the designation “Islamists” by non-member interviewees and other political parties. Notably for political parties, the label “Islamists” spares these parties the challenges associated with defining themselves as secular, which they fear would not be well-received by potential adherents. This designation reached a common popular discourse and established the non-civilian categorization of the MB. The limit of civilian lives amid either Islamist or military adoration discourses has become a common practice since 2014, with an either with them or against them coding of the population.

In Lieu of a Conclusion: Violence and Authoritarian Renewal

This research explains certain episodes of violence among non-civilian Egyptian political actors. The violence that erupted since 2011 and continues until today varies across perpetrators, collaborators, and victims. The civilian–non-civilian divide outlined in the book shows the status and space occupied by the civilian citizen whether in discourse or in practice.

Additionally, the book examines the use of terms like terrorism, as a form of political violence, at different periods of time in Egypt’s recent history, to identify how the term was employed politically to designate political enemies and to thread a unifying state discourse. The term terrorism has been frequently used to neutralize the opposition since 2013, dubbing any civilian or Islamist opposing the military regime a terrorist. The weaving of the current state’s discourse is part of the authoritarian renewal, which put – and continues to put – many activists, researchers, journalists, among others, in prison or forced them into exile.

The book leaves the reader with several ideas for new research. First, as military coups have been taking place in other countries in the region that have had similar Islamist-military power dynamics, a comparison bringing together Algeria, Egypt and Sudan, for instance, using the same approach would provide an interesting comparative study. Another compelling topic is the place of the citizen in the state discourse. Provided that a term like “mowatana” (citizenship)  was only introduced in the Egyptian constitution by Husni Mubarak in the 2000s, I raise the question, what space does the citizen occupy in contemporary state discourse?


Sara Tonsy is associate researcher at the Institute of Research and Study on the Arab and Islamic Worlds (IREMAM), Aix-en-Provence, France. Her recently published works include “The Normalization of the Muslim Brotherhood’s Religious Discourse in Egypt” and “A Political Geography of Cairo’s Eastern Suburban Spaces.” Tonsy’s research interests are narratives, citizenship, Islamist organizations, gender-based violence and civil-military power relations in the Middle East and North Africa.
Back Download