Book Launch: Armies of Arabia: Military Politics and Effectiveness in the Gulf, by Zoltan Barany
06 Dec 2021

Photo by the author
Zoltan Barany

Armies of Arabia examines the armed forces of the six Gulf monarchies and explains their ineffectiveness.

My new book – the first book-length examination of the six Gulf monarchies’ armed forces – explains the Arabian armed forces’ ineffectiveness despite their enormous defense expenditures with a combination of political-structural and sociocultural reasons. This blog lays out the main reasons why. 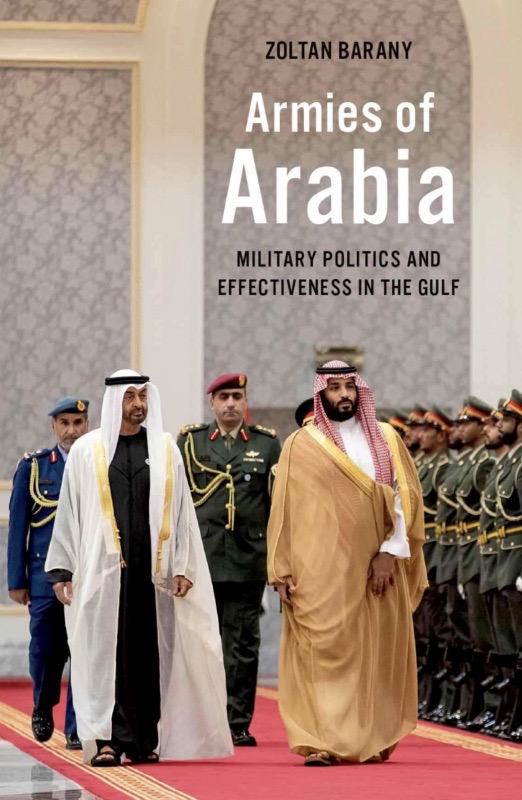 Political Structure and the Role of Gulf Militaries

The political-structural variables are rooted in Arabia’s autocratic political systems. The main function of the militaries is not the defense of the nation but, ultimately, the protection of the monarchical regimes from domestic challengers. The Gulf militaries are hampered by despotism – meaning that a single person often makes key decisions unfettered by elite involvement let alone representative institutions – and they are also damaged by nepotism and tribalism which directly contradict a fundamental pillar of effective militaries: meritocracy. The Gulf monarchies also create rival military institutions to balance the regular armed forces – to ensure that potential coups could be prevented or defeated – and to generate plum positions for members of the royal families and tribal allies.

Perhaps, most importantly, the ruling families do not expect to field armed forces capable of defending their countries from the stronger militaries of their regional neighbors. Instead, they hope that their armed forces can hold off a potential invading force, put up some resistance, to prevent the regime’s collapse. The real defenders of the Gulf monarchies are American and/or British forces. Their extensive arms procurement is not driven by strategic need. Rather, weapons acquisitions should be viewed as the premium Gulf governments pay for the insurance policy that guarantees a speedy American and other allied response should the need arise to defend them.

One of the sociocultural reasons for the Gulf military’s ineffectiveness is the societal preference for conformity and obedience and the corresponding aversion to critical thinking and independent initiative. Because Gulf officers are not used to independently evaluating alternative scenarios, they tend to perform poorly in settings that require personal initiative or present unanticipated situations. Another issue is the absence of direct accountability and criticism in Arabia’s militaries which is antithetical to military effectiveness. Commanders are seldom held responsible for their misdeeds. A related notion is that singling out someone for criticism is tantamount to humiliation and shaming. Therefore, learning lessons from poor performance is often difficult. In the armed forces, the stigma of (especially individualized) criticism guarantees that mistakes are repeated.

In deeply religious military environments of whatever faith, personal agency is often understated in favor of fatalism (i.e., if God intends it, it will happen). In other words, the belief that conclusions are already predestined by a higher being and one’s power to shape outcomes is more limited than it actually is, occasionally causes sub-par performance. Regardless of where they live, wealthy people who need not to exert themselves are difficult to incentivize and inspire. Whether in the Gulf countries or elsewhere, rich young men do not aspire to be ordinary soldiers just as they do not want to be janitors or night watchmen. That the bulk of the Arabian armed forces’ personnel are often poorly motivated and professionally indifferent is directly linked to the absence of a pressing incentive for them to excel.

Several recommendations might lead to improved efficiency of the Gulf’s armed forces. These start with implementing a sensible rank-pyramid that allows the retirement of unproductive time-servers. The military should be a life-long career only for its most exceptional officers. Second is to introduce incentives for excellence, rewarding those (at every rank) who take pride in performing at a higher level. In other words, move toward a military where promotion and compensation are based on merit. The third recommendation is raising the societal prestige of the military profession. This would create an environment in which service in the armed forces is considered an honor and an advantage in one’s post-military career. Fourth, start to empower non-commissioned officers (NCO) with serious responsibilities and real authority. The NCO corps should be differentiated according to skill, professionalism, and performance, instead of amount of time served.

The fifth recommendation is maximizing military personnel’s exposure to the world’s best armed forces through foreign study, deployments abroad, joint exercises, etc. This also requires eliminating or reducing training abroad for purely political reasons. It also entails accepting that as in other fields – such as aviation, commerce, internet, science – in security affairs, too, English is the lingua franca and improving the English-language of the officer corps in particular. Sixth, train more – more frequently, in foul weather and adverse circumstances, practice drills that anticipate realistic challenges, prepare for changing obstacles, and emphasize adaptability. The seventh recommendation, finally, is rationalizing weapons acquisition: purchase what is actually needed for the type of force desired to be developed and for conflicts that are most likely to occur.

Of course, adoption and effective implementation of these recommendations will be shaped by the political and sociocultural dimensions discussed above. In fact, the individual chapters of Armies of Arabia focus on different dimensions of the inquiry – that is, military politics, sociology, economics, diplomacy-foreign policy, and performance (including a multidimensional analysis of the Saudi-led coalition’s disastrous war in Yemen) – that correspond to the factors that illuminate the research question.

Zoltan Barany is professor of government at the University of Texas at Austin. He is chiefly interested in military politics and democratization worldwide. He authored various publications, including three books that were translated into Arabic, which are How Armies Respond to Revolutions and Why, Is Democracy Exportable? and The Soldier and the Changing State. He also coedited a number of books, such as Security Sector Reform in Constitutional Transitions.